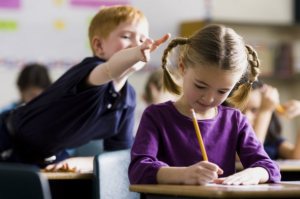 I can trace it back to kindergarten. There was a little boy who frequently picked-on me, and after an incident where he had pulled my hair…..I distinctly remember the teacher telling me that he was mean to me because he liked me, and did not know how to show it. Not long after that I had a fall off of the jungle-gym, and that little boy was the one who came running to my aid. I thought that was some kind of proof and confirmation that what the teacher had told me about him was true. Unfortunately, most of us likely have a similar story stored in a mental pocket—women and men alike. We were taught that those who treat us poorly do so because they like/ love us. How ridiculously backwards is that?

I have had my past share of excusing-off negative behavior as being due to some kind of inability to “face feelings”, or being “scared”. I also constantly see clients who struggle with this issue. No one wants to believe that they really are not wanted, or that someone that they themselves love would treat them so coldly and selfishly. It is far more comforting to tell ourselves that the other simply feels so much that it scares them, thus they need to push away at times, and have breaks…..and that if they are given enough love and time, they eventually will realize that they are in love with us, and see how great we are for having been so patient, and having put-up with so much. Yes, I was once guilty of that mentality, but it at least now helps me to relate to, and be compassionate towards clients who need help with understanding the truth of their situations.

Are there ever situations where people truly are struggling with what they feel, and thus it causes them to teeter-totter? Yes, there are. Sometimes it can be due to having experienced past abuse, mental conditions, being inexperienced with the depth of feeling/ relationship, or simply honestly on the fence with the situation etc… However, no matter the reason, it still is not right to treat others poorly, let alone to teach children that negative behavior demonstrates concealed love— and that it is not only excusable, but something to nurture. Despite there being some real reasons why people struggle with what they feel (and connecting to others in healthy ways), far too many simply do not feel for the other person, and will selfishly string-them-along for as long as they can get away with it—without intent to ever truly commit to the relationship. So many clients come to me suffering from similar situations of being routinely scooped-up and dropped, shoved-away, having affection withheld from them, being blamed for the other’s issues and problems, and sometimes outright being talked to, and treated in ways that damage them emotionally. Yet, despite that, they excuse it off by saying the other person does that because they struggle with this or that thing, and that they really do love them. Many people desperately want to gloss-over and excuse-off any kind of behaviors that they do not want to shine a light on, or be honest about…..but nevertheless, they still exist, and those behaviors will continue to pop-up regardless of how much we rationalize or attempt to blind ourselves. Why do we do that? Often it is out of the fear that they are the only person who will love us…. our only chance…. thus we try to ignore the behaviors, and other factors about them that are red-flags of it not being the right match, or even of it being an unhealthy situation. We would rather twist things into having different reasons (or as being something that the person will change about themselves), and keep pushing forward with false hope that some day the person, and the situation will truly be what we desire and need— so we should stick with it.

It is natural to want to believe the best of people, and give them the benefit of the doubt, but we also have to do so in a way that is both smart, and honest (with our own selves). If the same issues and behaviors keep arising, especially after having discussed things…. you have to pay attention. Anyone can say pretty words, make claims of how they are going to improve, or change this and that, but it is what people DO that truly needs to be looked at. Whether the actions are outright abusive, result in frequently withdrawing, cheating, or even trying to force you into loving them/ into the relationship to fulfill their agendas……you have to be honest, and call it as it is. You cannot tell yourself that they say abusively critical things because they are trying to help/improve you, or that they push you away because their feelings are so strong that it scares them. On the flip-side, do not convince yourself that smothering, possessive, or clingy behavior is just because they love you so much that they cannot help themselves ( that is obsessive infatuation, not love, no matter what they say, claim, or even believe themselves). If you put blinders up to these kind of situations, and make excuses for the other person…. you ultimately will make devastating mistakes, lose precious time, have your heart utterly broken…..and worse yet, could miss-out on others who could have resulted in being a loving match for you if you had not lied to yourself for so long. It is so rare that I see the above kind of situations improve for my clients— eventually most of them end-up either empty handed, or in very damaging situations. Ultimately you do sometimes have to put yourself first, and seek-out balanced, healthy relationships that truly fulfill your needs. They do actually exist. People can truly love you, and be dependable without requiring you to ride roller-coasters, dropping you frequently, or trying to push you into the things that they want/ who they want you to be. You have to love yourself enough to be honest about what you need, and who people really are…..and walk away if the situation is not right.

Additionally, we all need to become aware of how we talk to children in regard to relationships and love. We need to break the habit of telling kids that others are mean to them because they like them/ have a crush on them…. even if we are simply looking for a way to make them feel better about how they were treated. Those kind of words plant seeds—-big ones. I see the results of those seeds every day, and it is sad to see how much people lose to the beliefs that grow from those seeds. Instead, we should be teaching children that they should not tolerate those who are hurtful towards them, as well as teach how they should be treated, and in turn treat others. It works both ways. Many are taught it is okay to treat others poorly from those very same words and examples—-that others will put-up with selfish actions and still label it as love. Some will even believe that is how you treat those that you love.

Imagine how differently many of us would have looked at, and handled relationships had we not been taught to twist negative conduct around into backwards definitions? Would you have been spared mistakes and heartbreak ?